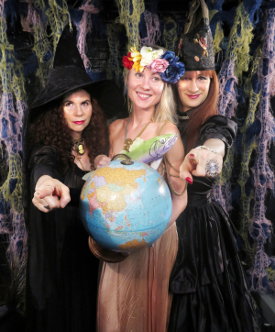 NEW YORK — Nonstop theater, a costume competition and ballroom dancing will bewitch the East Village in Theater for the New City’s 38th annual Village Halloween Costume Ball on Friday, October 31 at TNC, 155 First Avenue. This unique festival continues as a grand coming-together for everyday New Yorkers and artists alike. A carefree fall tradition, it celebrates the creativity that comes with the season.

Outside, there are R&B and Dixieland bands, fire eaters, jugglers, storyweavers and stilt dancers, all free to the public and a gift from TNC to its neighborhood. Inside, there is theater all evening. Appearing will be Star 69, Joe Bendik, George Billeci and Angel Choir, led by Matt Angel. Primy Rivera is emcee.

The annual costume judging begins at midnight with the “Monsters and Miracles Costume Parade,” as all revelers are invited to march past a panel of celebrity judges. Winners will receive one-year passes to TNC and a bottle of Moet and Chandon champagne. Attendees will be judged in such categories as “Most Magickal,” “Most Hydrofracked,” “Most Deep Fried,” “Most Presidential,” “Most Beheaded,” “Most Anti-Oxidant,” “Most Crony-Capitalist,” “Most Transparent,” “Most Encrypted,” “Most Plagerized,” “Most Corrupted,” “Most Vitamin Enriched,” “Most Global-Warmed,” “Most Whistle-Blown,” “Most Missing Bees,” “Most Austerity-Budgeted,” “Most Untaxed Corporate Inversion” and “Most Obama-Cared.” Celebrity judges will include Phoebe Legere, Bina Sharif, Chino Garcia, Andrea Fulton, David Willinger, Misha Shulman, Garland Lee Thompson, Miguel Maldonado, John Gilman, Robert Heide, Sabura Rashid, Romiro Sandoval, Tom Attea and John Jiler.