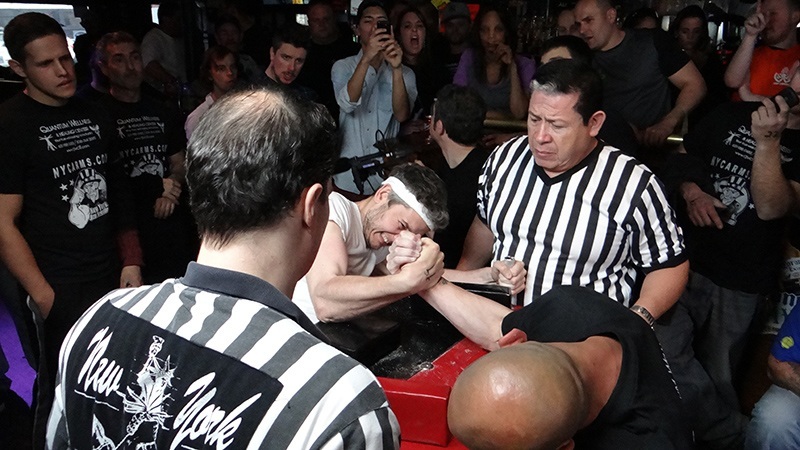 The Proud Sponsors are Quantum Wellness Healing Center and Spa. www.qwcli.org  of Syosset, NY, www.Ironmind.com and Captains of Crush Grippers. More than 100 men and women will compete in 17 Amateur and Pro weight classes for the prestigious Queens Golden Arm Wrestling titles. Queens’s male and female overall winners will be awarded Queens Strongest Arm MVP… Queens Strongest man (Right and Left) will receive $100 cash prizes; the top female will receive a Special Queens MVP award. The final matches begin at approximately 3:30 p.m. in front of a live captive and cheering audience. Awards and T-shirts will be presented to first, second and third place finalists and they will be invited to compete at the Finale – 37th Annual Empire State ‘Golden Arm’ Tournament of Champions Final (Official New York State Arm Wrestling Championships) to be held in November.

The NYC ‘Queensboro’ Arm Wrestling Championships is the oldest of all NYAWA championships, having begun in 1977 at the old Sunnyside Gardens Arena in Sunnyside, Queens, NY.  The ‘Queensboro’ Championships draws competition both locally from the five NYC Boroughs, Long Island, tri-state area and from as far away as Turkey, Russia and other distant lands, said Gene Camp, Founder and President of the New York Arm Wrestling Association. Camp continued, “We expect some of the best arm wrestlers in the world to compete for these unique NYC Queens Arm Wrestling titles where every match has an audience favorite and underdog.” The New York ‘Golden Arm’ Series consists of up to six preliminary championships and a final. Events are held in each of the five NYC Boroughs, Long Island, and upstate New York.  Upcoming events include the Brooklyn-‘Kingsboro’ and Bronx -‘Bronxboro’ Championships. Public Transportation: Take the E or F train to Union Turnpike/Kew Gardens; then take the Q-46 Bus to Main Street Flushing Stop. Walk three blocks to 149-05 Union Turnpike. For more information, partnerships, sponsorship opportunities, memberships, upcoming events, results, videos, photos and much more, please visit the NYAWA website at www.nycarms.com  or call Gene Camp at 718-544-4592. ###