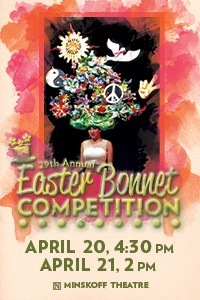 he 29th Annual Easter Bonnet Competition returns in April with the companies of Broadway, Off-Broadway and national touring productions offering skits, songs and dances, as well as elaborately designed bonnets created especially for the event.

The 2015 edition of Easter Bonnet Competition will again be presented at the Minskoff Theatre, currently the home of Disney’s long-running hit The Lion King.

Last year’s Easter Bonnet Competition raised $4,532,129. Since 1987, the 28 editions of this highly anticipated annual event have brought in more than $58 million.

Check back this spring for additional details, including the announcement of this year’s judges and special guests.