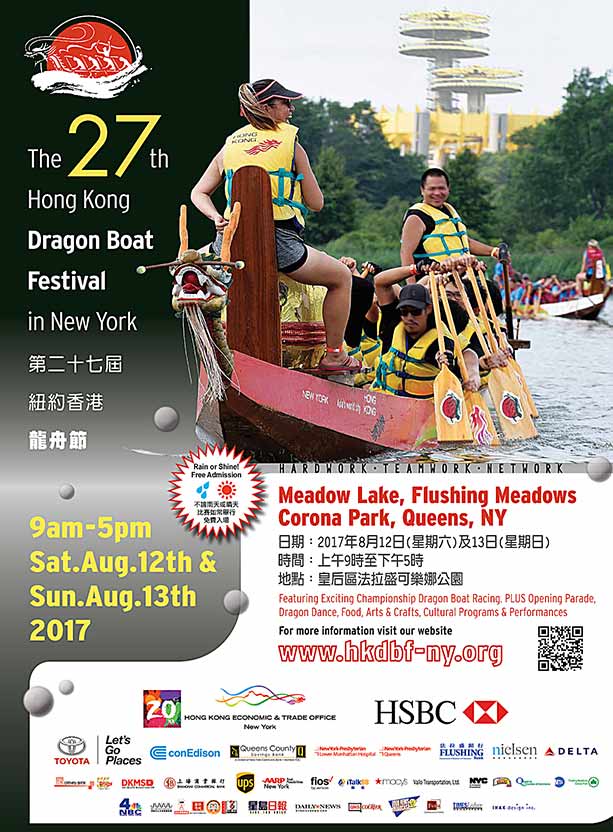 Our 28th anniversary HKDBF NY 2018 features events for the entire family, an opening day parade at noon on Saturday and the US Dragon Boat Open Championship Race on Sunday. Racing both days from 9am-5pm. Racing prizes this year include eight round trip tickets to Hong Kong provided by DELTA.

Other special races include the Health Care Invitational, the Educational Invitational, the Women’s Invitational, and the Senior’s Invitational. This year’s Corporate Invitational looks to be a good one, with sixeen Corporate Teams joining us to race for their companies. There are also special youth, women and sponsor races, plus a Media challenge and a Charity race featuring approximately $10,000 to be donated to the charities designated by the competing teams. Each of them will contribute $2500 to put in the charity fund. Over the years the Charity Race has contributed in excess of $250,000 to various NYC charities.

The program on the Main Stage showcases the best Regional multicultural artists and traditional music/dance from across the globe. The ever popular Shaolin Monks return for performances on both days. The New York Daily News brings back the CASYM Steel Orchestra comprised of 90 young members between the ages of 7 to 21. Master Storyteller Jonathan Kruk joins us again, spinning â€œDragon Tales.â€ In addition, we have demonstrations of traditional Asian folk arts and crafts, booths staffed by sponsors and many community-based organizations. Our enhanced food court offers several different ethnic cuisines.

Several of our Media Sponsors are back with lots going on. Multicultural Radio Broadcasting will be on hand offering a live radio broadcast both days. The Sing Tao Newspaper, celebrating its 50th anniversary, is offering activities for the entire family including a look at past photo entries and a preview of this year’s annual Photo Contest, which is open to all photographers.

As the title sponsor of the festival, our office will set up a large tent with lots of souvenirs for visitors to take home with. Families are welcome to take photos with the various delightful figures and be part of vivid illustrations of Hong Kong scenes. Fabulous gifts will be handed out for new Facebook followers on the spot. â€œOur Hong Kong Dragon Ridersâ€, the official dragon boat teams of HKETONY, will compete for championships in six different races â€“ NYC Heritage Mixed (250 meters and 500 meters), Hong Kong 20th Anniversary SAR Invitational along with the Family Invitational, the Hong Kong Education Invitational, Womenâ€™s Invitational and Sponsorsâ€™ Challenge.

Toyota is returning to display their latest vehicles. The New York Daily News is providing exciting performers for the main stage. Many other of our Sponsors are also returning with very special activities.

In the non-profit tent representatives will be on hand from Carnegie Hall celebrating their 150th anniversary, the Queens Library, MOCA, the Boy Scouts and Girl Scouts, the Queens Botanical Garden, New York Hall of Science, Queens Theater and others to promote their various programs.