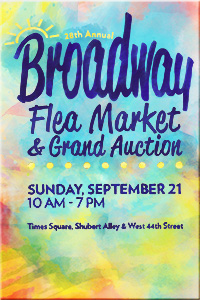 Be a part of the biggest day for Broadway fans as the 28th Annual Broadway Flea Market & Grand Auction returns this fall to Times Square, Shubert Alley and West 44th Street.

The free-to-the-public, once-a-year outdoor market will establish roots in the beautifully transformed pedestrian plaza along Broadway between 43rd and 44th Streets while also lining West 44th Street between Seventh and Eighth Avenues and filling the Flea Market’s first home in Shubert Alley. The always popular Autograph Table and Photo Booth will again be based on the deck of Junior’s Restaurant in Shubert Alley at West 45th Street.

Search for that missing piece of your Broadway collection, including out-of-print cast recordings and lost Playbills from almost any show you can imagine. Get lost in the stacks of signed memorabilia, costume sketches, props and photographs. There are treasures to be found in every price range.

Make a day of the Broadway Flea Market & Grand Auction with your friends. Come early to snag those hot one-of-a-kind items at more than 50 tables and to bid on new silent auction every 30 minutes. Don’t miss dozens of celebrities chatting with fans at the Autograph Table and Photo Booth. And cap it off with our live auction, featuring one-of-a-kind experiences and keepsakes.

Specific items for sale at the flea market, details about the grand auction lots and stars who will appear at the autograph table will be announced in September.