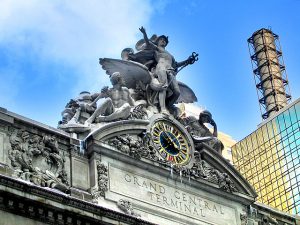 The following would be a press release concerning the release of the men’s and women’s draws.

The path to 2019 J.P. Morgan Tournament of Champions glory has been revealed with the release of the men’s and women’s draws today by tournament organizers.

With the release of the draws, match times and potential match ups are now available for the record nine days of match play on the Oracle NetSuite Suite Success all-glass court staged in Grand Central Terminal.

Since 1995, the sport’s longest continuous and most iconic tournament has attracted the world’s top squash players to the majestic Vanderbilt Hall. The two PSA World Tour Platinum draws will offer a tournament record prize purse of $360,000 split equally between the men and women.

On the men’s side, Simon Rösner’s title defense could mean a semifinal match up against world No. 1 and two-time ToC champion Mohamed ElShorbagy, and a potential final against world No. 2 Ali Farag. The German international enters the ToC with his highest career world ranking of No. 3.

The bottom half of the men’s draw is seeded for a rematch of the 2018 semifinal between Farag and 2018 finalist Tarek Momen, who enters his twelfth career ToC with his highest career ranking of world No. 4 as the Egyptian targets his first title.

The 2019 ToC presents an opportunity for Farag to claim the world No. 1 spot for the first time in his career should ElShorbagy exit the tournament in the semifinals or earlier and the Harvard graduate go on to claim his first ToC title. Farag will face a difficult first hurdle, however, with an opening match against 2010 champion James Willstrop.

Like the men’s side, the women’s draw is seeded for an all-Egyptian final between the world’s top two players, world No. 1 Raneem El Welily and world No. 2 Nour El Sherbini. El Sherbini, will be aiming to reclaim the world No. 1 ranking from her teammate as she targets what would be a record third ToC title. The twenty-three-year-old could face compatriot and three seed Nour El Tayeb in the semifinals. However, El Tayeb would need to get past Team USA’s Amanda Sobhy first in the third round.

Sobhy, the 2016 runner-up, made her return to the PSA Tour following her Achilles rupture at the 2018 ToC, and has already defeated El Tayeb once this season at the U.S. Open in October. Sobhy opens her campaign on the glass court against one of two Canadians, Samantha Cornett or Cornell graduate Danielle Letourneu.

Sobhy is joined by a record three American women in the draw, all of whom enter the top half of the draw with first-round matches at the Harvard Club. World No. 17 Olivia Blatchford Clyne will face off against Belgium’s Tinne Gilis in hopes of setting up a second round match against India’s fifteen seed Joshna Chinappa. Word No. 43 Haley Mendez will compete in the first women’s match of the tournament against Holland’s Milou van der Heijden. Sixteen-year-old and three-time U.S. junior champion Marina Stefanoni—who became the youngest main draw player in ToC history last year at fifteen—will face Egypt’s world No. 29 Zeina Mickawy.

Other men’s and women’s first-round matches will take place at the Princeton Club and New York Athletic Club.