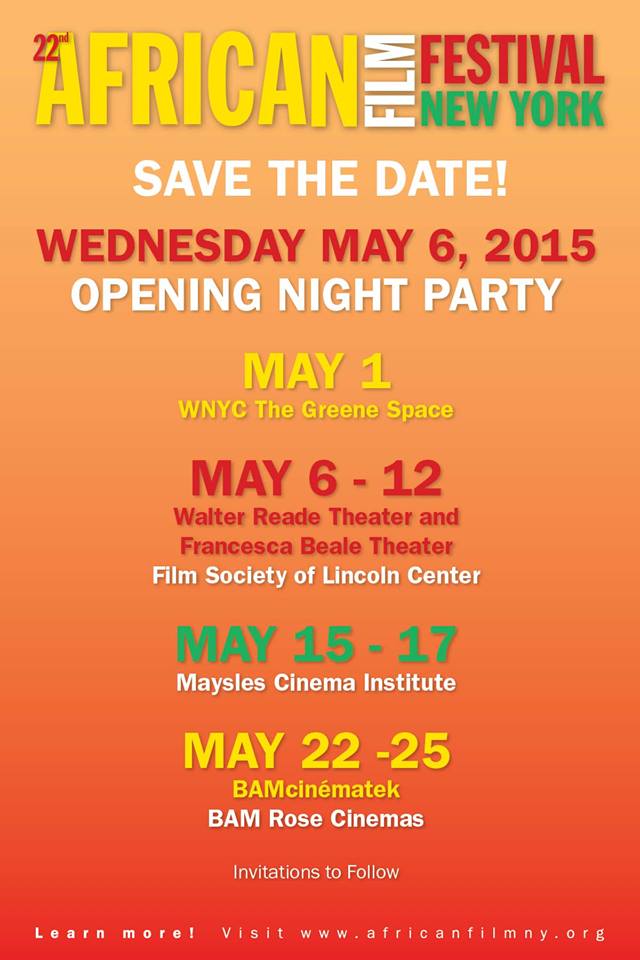 TO THE FILM SOCIETY OF LINCOLN CENTER MAY 6-12

NEW YORK, NY (April 15, 2015) – The Film Society of Lincoln Center (FSLC) and African Film Festival, Inc. (AFF) have once again joined forces to present the New York African Film Festival (NYAFF), running May 6-12. Under the banner of the United Nations’ International Decade for People of African Descent (2015–2024), the 22nd edition of the festival presents a diverse crop of 15 features and 13 short films from Africa and the Diaspora. The NYAFF continues throughout May at the Cinema at the Maysles Documentary Center and the Brooklyn Academy of Music’s BAMcinématek. The festivities take place as AFF celebrates its 25th anniversary.

Isa Cucinotta, Film Society of Lincoln Center Programmer said: “We are thrilled by this year’s selection of films exploring the breadth and depth of the African experience both on the continent and beyond. Through comedy, drama, and documentary, the striving of a people on the move is vibrantly expressed. We are happy to be able to share the dreams and hard work of today’s artists.”

“As we reach our anniversary, it is clear that on many levels we have achieved all we set out to do some 25 years ago in creating a festival to challenge the prevailing narrative about Africa through the cinematic arts,” said AFF Executive Director and NYAFF Founder Mahen Bonetti. “As we revisit our mission this year, we see that our community has not only helped bring our masters to the attention of global audiences but that we continue to push to the forefront new voices that celebrate Africa in this important moment in our history.”

A preview town hall event will take place on Friday, May 1 at WNYC’s Jerome L. Greene Performance Space. African artists living in the Diaspora will discuss how living outside of the Continent, but occupying a space where they are still “of the continent” influences their work and lives. The event will feature live musical performances by Les Nubians and hip-hop artist Blitz the Ambassador, as well as a reading from a literary work by Nana Ekua Brew-Hammond. Popular international journalist and Upworthy curator Femi Oke will then moderate a discussion with these artists and director Andrew Dosunmu.

The NYAFF will open on Wednesday, May 6 with the New York premiere of the South African film noir Cold Harbour. Directed by Carey McKenzie, the film pits township cop Sizwe (Tony Kgoroge, who won Best Actor at the 2014 Durban International Film Festival for the role) against a seedy underworld of criminals and fellow cops in his quest to investigate a smugglers’ turf war. The Opening Night reception will follow at the Frieda and Roy Furman Gallery at the Walter Reade Theater. Regular festival prices apply for the screening, and tickets can be purchased at filmlinc.com. Tickets for the movie and Opening Reception are $75 and are available online at www.africanfilmny.org.

The Centerpiece film, the stunning debut Red Leaves by up-and-coming Ethiopian-Israeli director Bazi Gete, is the tale of an aging Ethiopian immigrant in Israel who finds himself caught between his zealous fight to keep his homeland’s traditions alive and his children’s way of life in Israel. Gete offers audiences a masterful portrayal of the clash between family, culture, and modernity as well as an intriguing glimpse at an often overlooked realm of the African Diaspora. Directly following the U.S. premiere of the film on Friday, May 8, the Centerpiece Reception will be held at Frieda and Roy Furman Gallery at the Walter Reade Theater. Regular festival prices apply for the movie, and tickets can be purchased at filmlinc.com. Tickets for the screening and benefit are $75 and available online at www.africanfilmny.org.

The Closing Night film on Tuesday, May 12, is Safi Faye’s acclaimed 1996 drama Mossane, named after the 14-year-old rural beauty whose refusal to marry the rich man to whom she has been promised in favor of a poor university student brings on tragic consequences. Regular festival pricing applies.

The subtheme “Digital Africa: The Continuum” allows the NYAFF to note the numerous ways in which Africans—especially the youth—are using digital technology and art to connect with cultures around the world and create new visions of Africa and “Africanness.” Films include the small-budget, huge-impact digital film Love the One You Love by Jenna Bass as well as the U.S. premiere of a slew of titles on the vibrant arts scene taking place on the Continent. The film 100% Dakar – More Than Art by Sandra Krampelhuber explores the young artists in the Senegalese capital who have taken on the role of agents of change for their generation. Afripedia by Teddy Goitum, Benjamin Taft, and Senay Berhe is a five-part documentary short series that focuses on art in Kenya, Ghana, Angola, Senegal, and South Africa. The Prophecy documents two artists (photographer Fabrice Monteiro and designer Jah Gal) merging art with environmentalism through a photographic project taking on Senegal’s environmental destruction.

The accompanying free art exhibition The Prophecy will run from May 6-17 at the Amphitheater in the Elinor Bunin Munroe Film Center. The series of hypnotic, environmental-themed photographs represent the intersection of art, fashion, mythology, and nature and raise awareness of environmental concerns. A digital exhibit of stills from the series shot by Fabrice Monteiro will show how the Beninese-Belgian photographer and his team created each image.

Through the subtheme “Women in the Media,” the festival will explore the incredible strides female filmmakers have made over the past decade and a half. Films include 100% Dakar – More Than Art by Sandra Krampelhuber, Cold Harbour by Carey McKenzie, Love the One You Love by Jenna Bass, The Narrow Frame of Midnight by Tala Hadid, Mossane by Safi Faye, The Prophecy by Marcia Juzga, and Ziara. Beyond the Thresholdby Sonia Gámez, with many of these filmmakers in attendance. Additionally, Shorts Program #2: Women in the Media presents seven insightful and diverse films by women ranging from a retelling of the story of Rosa Parks in Akosua Adoma Owusu’s Bus Nut (starring actress MaameYaa Boafo of An African City fame) to a young girl’s encounters with Orishas in Brazil in The Summer of Gods by Eliciana Nascimento.

Screenings will take place at the Walter Reade Theater, 165 West 65th Street (north side, upper level, between Broadway and Amsterdam) and the Elinor Bunin Munroe Film Center, 144 West 65th Street (south side, between Broadway and Amsterdam). Tickets for the New York African Film Festival will go on sale to the general public on April 23 at the Film Society’s box offices and online at filmlinc.com. Pre-sale to Film Society members begins on April 21. Single screening tickets are $14; $11 for students and seniors (62+); and $9 for Film Society members. See more for less with a 3+ Film Discount Package starting at $33; $27 for students and seniors (62+); and $24 for Film Society members.

Following its opening leg at Film Society of Lincoln Center, NYAFF then heads to Maysles Cinema Institute in Harlem (May 14-17) and concludes over Memorial Day Weekend (May 22-25) at the Brooklyn Academy of Music BAMcinématek as part of its popular dance and music festival DanceAfrica.