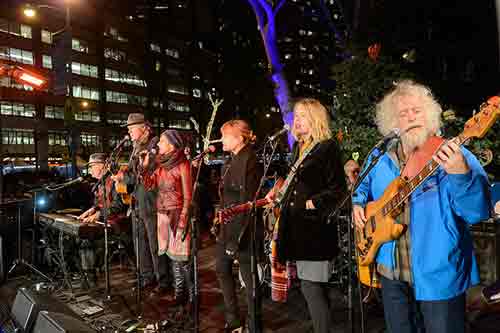 The celebration begins with the lighting of the Lincoln Square Holiday Tree in Dante Park at Broadway & 63rd Street and continues along Broadway from The Shops at Columbus Circle to 70th Street.

New York, NY – 2019 is marking a milestone for one of New York’s favorite holiday traditions! On the Monday after Thanksgiving, December 2, 2019, the Lincoln Square Business Improvement District (LS BID) will host the 20th Annual Winter’s Eve at Lincoln Square, transforming the Upper West Side into a small town for one night. Winter’s Eve is New York’s largest holiday festival featuring free live music, dancing, food, and holiday fun for all ages. The free, unique neighborhood celebration stretches almost 10 blocks in and around Broadway and draws upwards of 25,000 people from New York City and surrounding areas.

The festivities will kick‐off with a special headlining performance in Dante Park on Broadway and 63rd Street at 5:30PM followed by the traditional lighting of Lincoln Square’s Upper West Side holiday tree. For the sixth consecutive year, the holiday tree will be from New York State’s Domes Tree Farm, located in Bliss, New York.

Foodies & Holiday Cheer: Attendees should come hungry and ready to enjoy samples from more than 30 of Lincoln Square’s finest restaurants and eateries offering sweet and savory food tastings of their signature dishes at nominal cost ($1 to $4 from 5:30 PM to 8:30 PM). Plus, a number of local stores and neighborhood institutions will host performances, activities and holiday cheer throughout the evening.