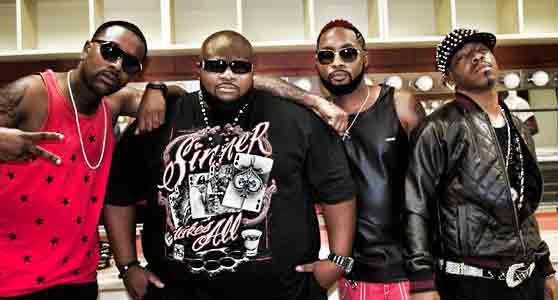 with Jon B and Kenny Lattimore

Lehman Center for the Performing Arts is on the campus of Lehman College/CUNY at 250 Bedford Park Boulevard West, Bronx, NY 10468.  Tickets for DRU HILL on Saturday, March 26th, 2016 at 8pm are $85, $75, $65, $55 and can be purchased by calling the Lehman Center box office at 718-960-8833 (Monday through Friday, 10am–5pm, and beginning at 12 noon on the day of the concert), or through online access at www.LehmanCenter.org.  Lehman Center is accessible by #4 or D train to Bedford Park Blvd. and is off the Saw Mill River Parkway and the Major Deegan Expressway.  Low-cost on-site parking available for $5.

DRU HILL originated as a Baltimore, Maryland gospel vocal group called 14K Harmony that was founded in the 1990s by childhood friends Tamir “Nokio” Ruffin, lead singer Mark “SisQó” Andrews, James “Woody” Green and Larry “Jazz” Anthony. They made a local name for themselves for their soaring harmonies and musicality while singing at The Fudgery fudge factory located in Baltimore’s inner harbor. After switching to R&B, the teenaged group was spotted in a 1995 talent show by Hiram Hicks who signed them to Island Records, changed their name to Dru Hill (after the West Baltimore neighborhood Druid Hill Park where they grew up) and recorded their first single “Tell Me” that rose to #5 on the 1996 R&B Billboard chart and was included in the movie Eddie. Their first album, 1996’s Dru Hill, went platinum, charted at #5 (R&B) and also included the #1 R&B hits “In My Bed” and “Never Make A Promise”, and “Whatever You Need” which made it to #7. Dru Hill was honored with the 1997 Billboard Music Awards for Top R&B Song, Top R&B Artist and R&B/Hip Hop Songs Artist of the Year and the 1998 Soul Train Best R&B/Soul Single and Best R&B/Soul Album Awards. In 1997, the group recorded “We’re Not Making Love No More” that was written by Babyface and co-produced by Babyface and Daryl Simmons for the film Soul Food. The single was a #2 R&B hit, went gold and was included on the film’s #1 R&B selling soundtrack album that was a huge success, going multi-platinum. Their next hit song “How Deep Is Your Love” spent 3 weeks in the #1 R&B spot and was featured in the film Rush Hour. It was included on their 1998 multi-platinum second album, Enter the Dru, that climbed to the #2 spot on both the Billboard Top 200 and R&B album charts, sold two million copies by the end of 1999 and also contained three addition hit songs: “These Are the Times”, “Beauty” and “You Are Everything”.

In 1999, Dru Hill went on hiatus so that the individual members could each work on a solo album: SisQó a pop album, Jazz a R&B/soul album, Nikio a hip hop album and Woody a gospel album. SisQó’s debut solo pop album Unleash the Dragon was released at the end of 1999, rising to the #2 spot on both the pop and R&B album charts and went five times platinum. The album contained the smash pop hits “Got to Get It” (#12 R&B), “Thong Song” (#3 pop, #1 R&B) and “Incomplete” (#1 both pop & R&B) and earned SisQó scores of awards including six 2000 Billboard Music Awards (the highlight being the Male Artist of the Year), the 2000 MTV Best Hip Hop Video Award and four additional nominations, four 2001 Grammy Award nominations and two 2001 American Music Award nominations. His follow up second solo LP, Return of the Dragon, was released in June 2001 and went platinum with the singles “Dance for Me’ and “Can I Live”. SisQó released his third solo LP, Last Dragon in 2015.

Dru Hill as a group reunited in 2001 and added a fifth member Rufus “Scola” Waller to record Dru World Order which went gold reaching #2 on the 2002 R&B album charts and contained the hit songs “I Should Be…”, “I Love You” and “No Doubt”. The group toured until 2005, when they went on a second hiatus, reassembling in 2008 without Scola. In 2010, Woody left the group to concentrate on gospel music and was replaced by Antwuan “Tao” Simpson for the recording of Dru Hill’s fourth album InDRUpendence Day which climbed to #10 on the R&B album chart. SisQó, Nokio, Jazz and Tao are currently touring in celebration of Dru Hill’s 20th anniversary and are working on a new album that is scheduled to be released later this year.

Jonathan Buck, nicknamed JON B, is a R&B/Hip Hop singer/songwriter that was born in Rhode Island and raised in Pasadena, California. The son of professional classical musicians, he started drumming on anything he could at age five and played the piano by the time he was 9 years old. In a departure from his family, he found his passion in popular and R&B music. His debut album, 1995’s Bonafide, hit #24 on the R&B album chart, went platinum, and contained the hit songs “Someone to Love” featuring a duet with Babyface that was nominated for a Grammy award, and “Pretty Girl”. His next release Cool Relax was even more successful, going double platinum, earning six 1998 Billboard award nominations. That LP included the smash hits “I Do (Whatcha Say Boo)”, “They Don’t Know”, and “Are You Still Down” featuring Tupac Shakur. His third studio release Pleasures U Like (2001) featured collaborations with some of R&B and Hip Hop’s heavy weights including Babyface, Faith Evans and rappers Nas, AZ and Cuban Link. That record went gold and contained the successful single “Don’t Talk”. Since then, Jon has released three more albums: Stronger Everyday (2004), Helpless Romantic (2008) and Comfortable Swagg (2012) and has had a busy side career penning hit songs for artists as diverse as Luther Vandross, Toni Braxton, New Edition and the Spice Girls.

KENNY LATTIMORE is from the Washington, D.C. area where he was raised in a musical family. His solo debut album Kenny Lattimore was released in 1996 to great fanfare, went gold and included two hit songs: “Never Too Busy” and the Grammy nominated perennial wedding favorite “For You”, as well as earning Lattimore the 1996 NAACP Image Award for Best New Artist. His 1998 follow up album, From the Soul of Man, a critically acclaimed set of classically styled soul music yielded hits like “Days Like This” and “If I Lose My Woman”. After releasing his third solo LP Weekend in 2001, Lattimore switched gears and recorded two duet albums with his wife Chante Moore. Their first release, 2003’s Things That Lovers Do was a smash hit, rising to #3 and 31 on the R&B and pop album charts respectively and quickly sold over a million copies. Their follow up album, a double-CD of gospel and R&B love songs entitled Uncovered/Covered (2006) debuted at #10 on the Billboard R&B chart and #2 on the gospel chart. Returning to a solo format, Lattimore’s nuanced vocals can be heard on his 2008 release Timeless which rose to the number six position on the R&B album chart. Most recently, he released his seventh solo album, Anatomy of a Love Song in 2015 that focuses on what he does best- tender, sensuous vocal singing penetrating, honest lyrics in a style that is a cross between modern and classic R&B.