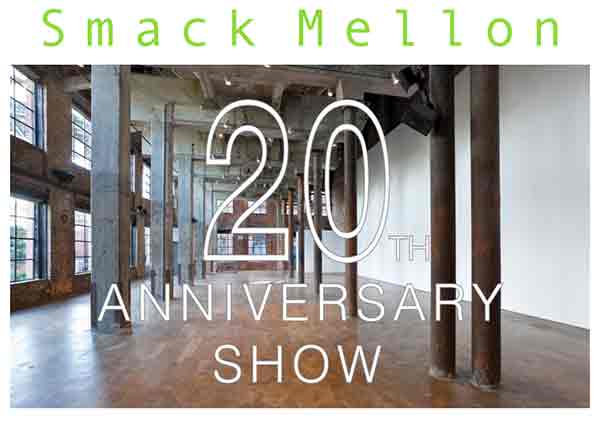 Learn more at the official site…

Smack Mellon turns 20 and marks the milestone with a large exhibition of 90+ works by artists who have participated in their Artist Studio Program, curated by Charlotta Kotik, the former curator at the Brooklyn Museum, and loyal champion of artists and art spaces.

Smack Mellon has made a significant contribution to supporting emerging and under-recognized mid-career and women artists through providing studio workspace and access to equipment and technical assistance for the realization of ambitious projects. As an early pioneer in Dumbo and over the past two decades Smack Mellon has served hundreds of artists and hundreds of thousands of people have visited our galleries and studio spaces. One of the highlights of our 20th Anniversary celebration is Ward Shelley’s timeline drawing The First Twenty, which includes the name of every artist that created or presented work at Smack Mellon, as well as featuring the transformations of the neighborhood’s cultural life since our inception.

Smack Mellon was founded in 1995 and incorporated in 1996. In 1998 we began a partnership with the Walentas family and their company Two Trees Management. At that time, Two Trees had a number of vacant historic, industrial properties throughout Dumbo and was interested in providing their spaces in-kind to not-for-profit organizations to use for cultural programming. From 1998 to 2005 we occupied a Civil War-era iron foundry, which had been turned into a spice milling and grinding factory in the 1950s. Our current location is a former coal fired boiler house that provided steam for heat and power to several industrial buildings in the neighborhood. We thank the Walentases and Two Trees for providing awesome and inspiring spaces for our programs and we thank all of the foundation, government and individual donors who have supported our mission over these many years. It is by their generosity that Smack Mellon has been able to succeed in providing opportunities for artists to create ambitious projects and present them to diverse audiences.