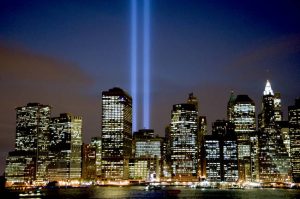 Tribute in Light Returns on September, 11, 2021 to Rise Into the New York City Sky

In remembrance of the many lives lost on September 11, 2001, the Tribute in Light will shine into the skies above the city this year 20 years after that fateful day. The twin beams can be seen for miles and miles from its epicenter in lower Manhattan. They will light up beginning at sunset and fade away the next morning at dawn.

As has been the case in years past, the 9/11 memorial will be closed during the earlier part of the day for the Commemoration Ceremony which will not be open to the public. It will reopen for everyone beginning at 3:00 pm and will close again at midnight.

Keep in mind that the lights do not emanate from a location accessible to the public. You merely need to have an unobstructed view of the skies over lower Manhattan to be able to see them.

The following comes courtesy of the 911 Memorial Museum’s recent newsletter:

“As an extension of Tribute in Light, for the 20th anniversary of the September 11, 2001 attacks, the 9/11 Memorial & Museum has once again partnered with NYC & Company and buildings throughout the city to light up their facades and rooftops in sky blue. “Tribute in Lights” is a unique, but simple gesture of collective remembrance that will illuminate the city on the evening of the anniversary. Current participants include New York City Hall, the Empire State Building, Bloomberg, L.P., the Perelman Performing Arts Center, the Times Square Ball and more. For a complete list of all those participating in the Tribute in Lights, please visit www.911memorial.org/tributeinlight.”

The twin lights represent the original Twin Towers. Each Beam is comprised of 88 refrigerator-sized 7,000-watt xenon searchlights positioned in two 48-foot squares that echo the shape and orientation of the twin towers.

Below is a set of images taken years ago by us: