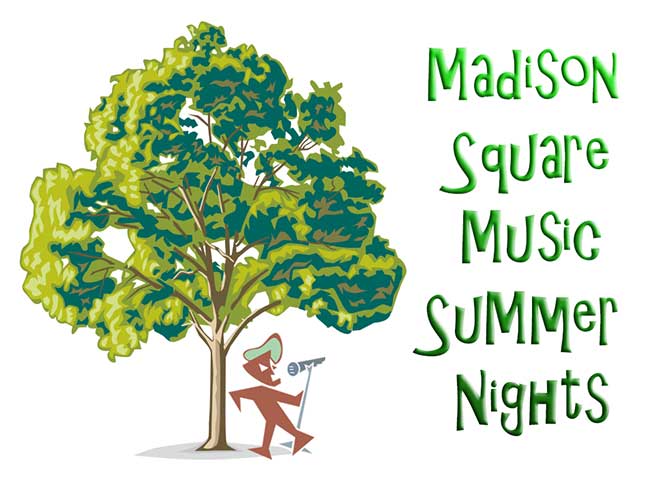 Music from across the world comes together for this vibrant series of music to make you dance. Featuring a list of award-winning musical acts from around New York City, experience the best talent in genres from salsa to soul.

Mad. Sq. Music: Summer Nights runs on Wednesdays at 6:00 pm and will feature diverse acts beginning on July 11 with the Williamsburg Salsa Orchestra. On July 18 at 6:00 pm, the Park welcomes The Gold Magnolias. Falu performs July 25, and Los Habaneros will play on August 1. Saxophonist Spirit Family Reunion will hit the stage on August 8 followed by the series’ closer M.A.K.U. Soundsystem, on August 15.

The Williamsburg Salsa Orchestra is a thrilling 11-piece salsa group which plays dynamic, dura arrangements of indie rock tunes we love. No bananas in the hair; this is innovative, astonishing salsa with a new, vibrant aesthetic. With an ever-evolving set list, WSO has taken the typical salsa form and infused it with a completely modern identity. The explosive arrangements have established the band as a groundbreaking force in the New York underground, and has let to international acclaim for its completely new approach to the genre. Led by percussionist/arranger Gianni Mano (from the Latin-funk legends Radio Mundial), and fronted by Argentinian chanteuse, Solange Prat, the WSO has found an audience among new and classic salsa lovers, quickly becoming one of the most popular bands in New York City.

The Gold Magnolias: Magnolium Aurum: A rare species of gilded flora native to the U.S. south, but found lately in the seldom-greens of NYC, the five petals of Magnolium Aurum represent the five pillars of soul and funk.

Songsmith, Hudson Mueller, and golden-throated Evan Felts lead the pollination effort with their sweet lyrics. All the bees are flockin’ with Ryan Anselmi’s siren sax call, and the funky foundations of bass-man Daniel Foose and drummer Jeff Barton.

For the past seven years, this union of southern soul soldiers has wafted their funky fragrance to audiences across the land with such hits as “Brooklyn Streets” and “Southern Man.”

Falu, known for her “Indie Hindie” sound, blends traditions of Indian classical and folk music with western pop, rock and electronic styles to create songs that explore themes of womanhood, romance, longing, and loss. Seamlessly able to vacillate between 5 different South Asian languages while backed by her award-winning band, Falu has been called “Ethereal and Transcendent” by Billboard Magazine, while her sound “reflects a rare brand of timelessness and Avant-guard charm” (Vogue India). Falu’s dynamic live performance draws upon her ancient, South Asian roots through traditional instrumentation and fuses it with jazz improvisation, a dash of Bollywood and Bhangra.

Bridging cultural gaps for over a decade, Falu’s transcendent music was donned as “East and West, ancient and modern” by the New York Times. Check out her most recent album, “Foras Road”, and videos of her live performances from Carnegie Hall to Festival Internationale de Louisiane at Falumusic.com.

The explosive Los Habaneros are a force to behold on stage. Mixing musical styles from their home in Cuba with the diversity of sounds they encountered when they made New York City their home, Los Habaneros transcend traditional musical genres to create a real fusion that provokes fans into hip-shaking abandon. The band is comprised of a young generation of Havana-trained musicians, including director and singer Gerardo Contino.

The band’s first album, Somos Latinos (2013), was released to very high critical acclaim, and their second album, Los Habaneros (2018) is a wide cross-section of Latin music fused with the sounds of NYC. Los Habaneros have toured in Peru, Canada, Qatar, and all throughout the United States. They have played at the Kennedy Center for the Arts, the American Folk Festival, Brooklyn Academy of Music, BB King Blues Club, Subrosa, BAMCafe, The Green Space, Sounds of Brazil (SOBs), Le Poisson Rouge, The Bronx Museum, the American Museum of Natural History, Live at the Gantries, Roulette, Gonzalez y Gonzalez, Taj, and many others. ​

Spirit Family Reunion began singing together on the street corners of New York City in 2009. Since that time they have travelled the highways of America delivering raw, high energy, honest music. They have shared the stage with musical heroes such as Pete Seeger and Levon Helm, and have given notable performances at festivals including Stage Coach, Austin City Limits, Hardly Strictly Bluegrass, and the legendary Newport Folk Festival three times. The band has self-produced and self-released two full-length studio albums – “No Separation” (2012) and “Hands Together” (2015) – along with multiple songbooks and other collections of recordings. They are currently working on a new record.

M.A.K.U Soundsystem, based in New York City, are the Innovators of immigrant beat, a unique sound that encompasses their immigrant experience. On stage M.A.K.U juxtaposes traditional Colombian percussion, drum-set, electric bass, guitar, and vocals to create an explosive performance filled with unshakable grooves. The band releases their new EP, Cinco Fuegos, this summer.