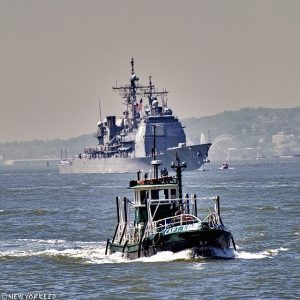 Ship departures are as follows:

SUNY Maritime College in the Bronx:

In addition, USCGC Richard Snyder (WPC 1127) will also depart the area on Wednesday.

Throughout the weeklong event, more than 2,300 Sailors, Marines and Coast Guardsmen participated in numerous community relations projects, including visits to local area schools, revitalization projects with Habitat for Humanity, outreach efforts through Project HOPE, area community parades, as well as assisting in soup kitchens and senior centers to provide a helping hand to the citizens of New York who graciously hosted them.

At public venues, such Eisenhower Park and Prospect Park, USN and USMC aviation teams showcased a variety of troop insertions; in Manhattan and Staten Island, USCG helicopters demonstrated Search and Rescue operations; in Times Square, USN divers showcased their skills; and at Liberty State Park, all service were represented to demonstrate the latest capabilities of today’s maritime services.

Navy Band Northeast, as well as the USMC Battle Color Detachment, performed for thousands of onlookers throughout the city.

Service members also participated in a Re-enlistment and Promotion Ceremony at the 9/11 Memorial, which celebrated service members’ renewed commitment to uniformed military service.

As of today, nearly 70,000 citizens have visited and toured USN and USCG ships, and attended public aviation events throughout the week. Ships are open for public tours today. Guests are reminded to arrive early for tours and adult visitors 18 years of age or over are required to show a valid state or federal issued picture I.D. Additionally, electronic smoking devices are prohibited.