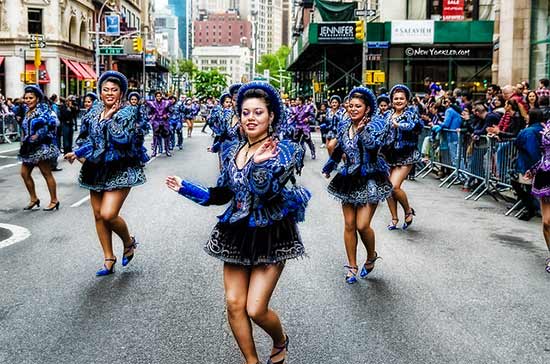 The parade commences at Broadway and 21st Street, travels south through Union Square, turns East onto 8th Street and continues into Tompkins Square Park in the East Village.

The grandstand is located in Astor Place Plaza, where Fourth Avenue meets St. Mark’s Place. Seating more than 300 spectators, the stands are the best seat on the parade route as 10,000 dancers stop and perform.

Tickets are available for purchase and all proceeds go to the cost of the parade.

DanceFest 2018 in Tompkins Square Park, the destination of the parade at Avenue A and Saint Marks Place, comes alive with choreographed performances, dance lessons and social dance – all free to the public.  Five stages and site specific work throughout the park offer something for everybody including performances by culturally diverse participants from the parade and an opportunity to learn dance from the city’s best dance teachers.