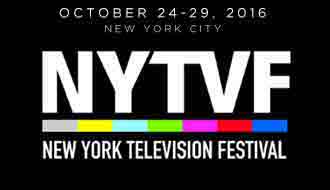 Get Tickets for the 12th Annual NYTVF Today!

The leading festival for indie television will host TV fans and creators for a week of panels, premieres, and more from October 24-29 in NYC. This year’s Primetime lineup includes the final season premiere of SundanceTV’s Rectify, comedy events from Seeso, truTV, MTV, Pop, a keynote conversation with GIRLS featuring Jenni Konner and Lena Dunham, and a first look at TNT’s new drama, Good Behavior. All Primetime events are FREE and tickets can be reserved through the NYTVF Box Office.

Interested in indie TV? The NYTVF’s flagship initiative, the Independent Pilot Competition, is screening 2016 Official Selections all week long! From Monday, 10/24 to Saturday, 10/29, you can see what independent content creators are making at IPC screenings.

Don’t miss your front-row seat to the future of TV. Visit the NYTVF Box Office for full event details and get your tickets today!