A New Musical About 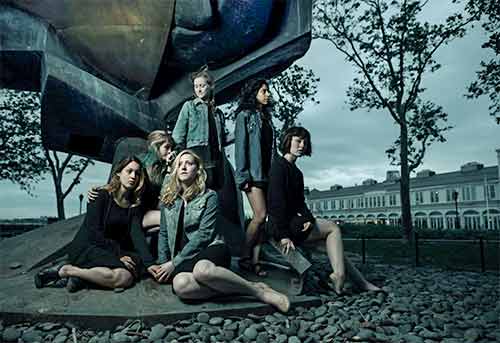 The Fall will be presented at The Steve & Marie Sgouros Theatre, located at 115 MacDougal Street in New York City.

Tickets ($18) are available by visiting www.thefalltheplay.com.

Fifteen years have passed since 9/11, but life without dad has not gotten any easier. In this memory play-meets-docudrama, six young women search for identity, understanding, and redemption in the wake of a national — and very personal — tragedy. The Fall has moved and inspired audiences since its conception in 2011, and it continues to be the one and only theater piece focused specifically on the children of 9/11 victims. Performed less than a month before the fifteen-year anniversary of 9/11, The Fall is an unforgettable theatrical experience.

The Fall is written by Lilia Rubin and directed by Jane Arnfield, with music direction by Katie Doherty.

Lilia Rubin (Author) is thrilled to embark on this second collaboration with Jane Arnfield and Katie Doherty after The Fall’s international premiere at Northern Stage UK. A multidisciplinary theatre artist, Lilia has written, directed, produced, and performed in her original work at the Experimental Theatre Wing (ROJO, Drinks are on Pearl) and 440 Studios, where her play The September Girls garnered a 2012 Emerging Jewish Artist Fellowship. A world traveler with a love of teaching, She has taught English to Buddhist monks in Nepal, lead acting classes for children in rural Guatemala, studied the work of Federico Garcia Lorca in Spain, and accompanied Theater Mitu on a research retreat in Japan. Lilia holds a BFA in Drama from NYU Tisch School of the Arts, where she originated the role of Meg in We Are All in Paradise (dir. Lear deBessonet & Todd Almond), and starred as Richard in Richard III (Classical Studio). Other favorite acting credits include Clara in Debacles (hotINK/The Lark), the title role in The Diary of Anne Frank (New Repertory Theatre), and Juliet in Romeo and Juliet (Stoneham Theatre).

Jane Arnfield (Director) is a Reader in Arts specializing in Theatre & Performance at Northumbria University UK, where she also serves as Program Director of Fine Art. An active theatre practitioner and actor since graduating from Dartington College of Arts UK, Jane’s main work has been as a member of three ensembles: Mike Alfreds’ theatre company Method & Madness, the David Glass Ensemble — through which she facilitated and lead Lost Child Projects in South East Asia, South America, & Europe — and Northern Stage Ensemble UK. She has worked with international theatre director Mike Alfreds at the Hampstead Theatre, Young Vic, and Shakespeare’s Globe in London and New York, playing Imogen in Cymbeline opposite Mark Rylance. As a researcher, Jane is focused on investigating the form of autobiographical performance, collecting data of survival mechanisms deployed by humans in catastrophic circumstances.

Katie Doherty (Music Director) is an award winning singer-songwriter. In the UK, she was worked with artists such as Nitin Sawhney, Kathryn Tickell, and Howard Goodall. As a composer and musical director she has worked under the direction of Samuel West with the Royal Shakespeare Company and more recently with Northern Stage on five highly acclaimed Christmas Productions. As well as her solo work, Kate regularly tours with the acclaimed folk duo Broom Bezzums, who are based in Germany.