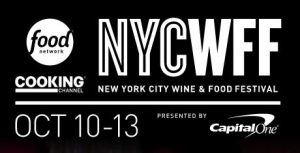 Presented By Capital One Unveils 2019 Program

New York, NY (June 3, 2019) – The Food Network & Cooking Channel New York City Wine & Food Festival presented by Capital One (NYCWFF) returns for its 12th annual edition this Fall, taking over the Big Apple October 10 – 13, 2019. With more than 80 events taking place at locations throughout the city, 100% of the net proceeds from the Festival support its mission to EAT. DRINK. END HUNGER. with Food Bank For New York City and No Kid Hungry®. This year’s program highlights a mix of tastings, dinners, brunches, late-night parties and more; accented by a returning selection of family-friendly offerings to keep fans of all ages engaged throughout the weekend.

In addition to this, during NYCWFF Capital One cardholders can take advantage of priority and early entry, reserved seating, exclusive discounts and more at select events. Ticket sales open to the general public on June 24.

This year, the Festival’s signature evening, large-format tasting events move to Hudson River Park’s Pier 97, and include the following line-up of new and returning themes:

One of America’s most beloved morning show personalities has gathered his whole crew to kick-off the weekend at Elvis Duran’s Taste of New York hosted by Elvis Duran & the Z100 Morning Show on Thursday, October 10, celebrating his favorite New York City restaurants and the launch of his first book Where Do I Begin?: Stories from a Life Lived Out Loud (Atria Books, October 2019).

Friday, October 11 marks the return of the Blue Moon Burger Bash presented by Pat LaFrieda Meats hosted by Rachael Ray, the iconic battle of burgers that will also commemorate the release of Rachael Ray 50: Memories and Meals from a Sweet and Savory Life: A Cookbook (Ballantine Books, October 2019).

The Festival will close-out with a Sunday Brunch hosted by Marc Murphy & Devour Power on October 13.

The complete program of events for NYCWFF is now available online at nycwff.org. Stay up to date by following the conversation all year long on Facebook, Instagram and Twitter using @NYCWFF/#NYCWFF.