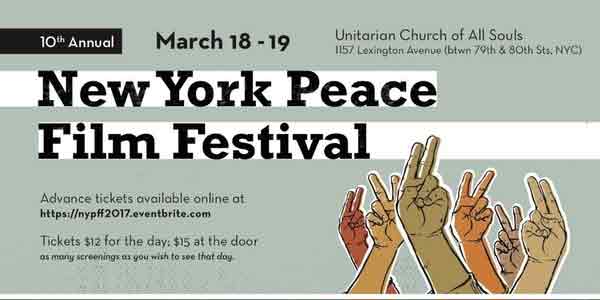 New York, NY – The Tenth Annual New York Peace Film Festival (NYPFF) will feature five (out of 11) films that focus on the refugee crisis/immigration issue that now grips our nation and the world. Since the advent of the Syrian civil war and now the chaos of the Trump administration, refugees and immigration are front and center. Our first screening is Saturday March 18 at 1pm featuring the full length documentary Astral, the story of a luxury yacht converted to use in rescuing refugees fleeing across the Mediterranean from the upheavals in the middle east and north Africa. The acquisition of the yacht, it’s conversion from pleasure to work, and the harrowing scenes of refugee rescue create a compelling story in this saga.

Directly following Astral are two documentary shorts that expand on that saga. The first, at 3:30 pm on Saturday March 18, is From Damascus to Chicago and follows a Syrian family that was granted refugee status and tracks their coping with life in the U.S. The two children are delightful in their dance classes and English studies and how they look hopefully and eagerly toward their integration into American life. Their parents, understandably, miss the surety of family and familiar neighbors (already destroyed by the civil war) and struggle to adjust to their new environment. Then, at about 4:00 pm, Persisting Dreams takes us back to the Mediterranean and a small Greek fishing village who’s vessels now spend half their time picking up refugees at sea rather than fishing. The psychological toll on the men and women of the village and the surprising bonding that happens with the refugees is laid bare in this calmly paced film.

Jumping ahead to the second and final day of the festival, on Sunday March 19 at 4:15 pm we screen Enemy Alien, an hour long film documenting the unlawful detention and inhumane treatment of Palestinian born human rights activist Farouk Abdel-Muhti by the U.S. security apparatus and the movement to free him. Transferring him from prison to prison in different states to circumvent court ordered releases, the U.S. government persisted in his unlawful detention for a half dozen years. Then at 5:30 pm on Sunday our festival concludes with the screening of Walls, an examination of three areas of the world where walls prevent the free flow of people across borders: the US/Mexican border, the Morocco/Spain wall, and the Zimbabwe/South African wall. There are millions of kilometers of fences, railings, barbed wire and walls separating peoples in the world and this film is a testament to their inhumaness.

All screening take place at All Souls Unitarian Church, 1157 Lexington Avenue (between 79th & 80th Streets). The festival starts with a kickoff party on St. Patrick’s Day, Friday, March 17 at 7:00 pm at the same location, followed by two days of screenings. The Peace & Justice Task Force of All Souls Unitarian Church is co-sponsoring the festival again this year. The opening party will feature trailers of the films to be screened in the festival and shorts on related topics. A number of the filmmakers will be speaking about their films. Refreshments will be served. The public is invited free of charge to the kick-off party, but an RSVP is requested and should be sent to [email protected] or by calling 917-692-2210.

The following two-day festival will screen 11 films including 4 full-length documentaries, 3 short documentaries, one dramatic short and this year’s classic anti-war film, Hiroshima Mon Amour, directed by Alain Resnais. We will also feature one film specifically geared to a family audience. This year’s festival films are a world-wide response to the issues of the day with films from Spain, Greece, Kashmir, France, Japan and the U.S. For many of the films we will be joined following the screening by the filmmaker either in person or via Skype.

Ticket prices for the Saturday and Sunday festival are $12 in advance for one entire day’s screenings, and $15 at the door (again for as many screenings as you wish to see that day). Children are admitted free of charge with a paying adult. Advance tickets can be purchased through www.nypff2017.eventbrite.com. Cash only at the door.