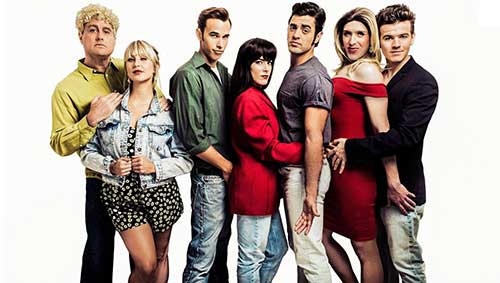 The New Off-Broadway Musical Parody of

Created by Bob and Tobly McSmith

Relive the Drama! Relive the Drinking and Drugging! Relive the Sideburns! From Bob and Tobly McSmith, the creators of Bayside! The Musical, Full House! The Musical!, Katdashians! The Musical! and Showgirls! The Musical!, 90210! THE MUSICAL! answers all of the most dramatic questions: Can Brandon and Brenda be 90210 cool? Who would win the 1993 Sideburn Contest: Dylan McKay or Brandon Walsh?! Who dies at the Peach Pit?! Will Steve Sanders be eaten by a Sharknado?! Who has resting Brenda face?! IS ANDREA ZUCKERMAN POOR AS HELL?! Can Emily Valentine kick her crippling UE4A addiction in time to burn down the school?! Will Tori Spelling graduate?!

Bob and Tobly McSmith (Creators/Authors) are huggable weirdos who met at a Girl Scout convention. They are the writers/directors of Bayside! The Musical!, Full House! The Musical!, Katdashians! The Musical!, Showgirls! The Musical! and JonBenet! Murder Mystery Theater! Bob and Tobly have been nominated for a cornucopia of honors including “Most Likely to Improve Sexually” (Tobly, 5th Grade) and “Class Masturbator” (Bob, 1st-12th Grade).  They are working on their next musicals: Anne Frank 2: Hungry for Vengeance (and Bread) and Philadelphia: On Ice.

90210! THE MUSICAL! features music by Assaf Gleizner. Born and raised in Tel Aviv, Gleizner graduated from SUNY Purchase with a degree in Jazz Performance. Since graduating Assaf has been consistently working as a music director, orchestrator, arranger and performer. Favorite Off-Broadway credits include The Astonishing Times of Timothy Cratchit, Full House! The Musical!, Flak House, The Travels and I Battled Lenny Ross.

Tegan Miller (The Little Mermaid) is the musical director. Carmen Mendoza (Katdashians! The Musical!) is the costume designer.

Performances will be held on Thursdays at 8pm and Fridays and Saturdays at 7pm. Tickets ($25.50 – $35.50) are available by visiting 90210TheMusical.com. Special Drama Zone seating is also available.

Warning: Contains dramatic situations, dramatic drama, unnecessary drama, strong and dramatic language, partial nudity from Dylan McKay, and drama that may not be appropriate for people under the age of 16 or over the age of 101.